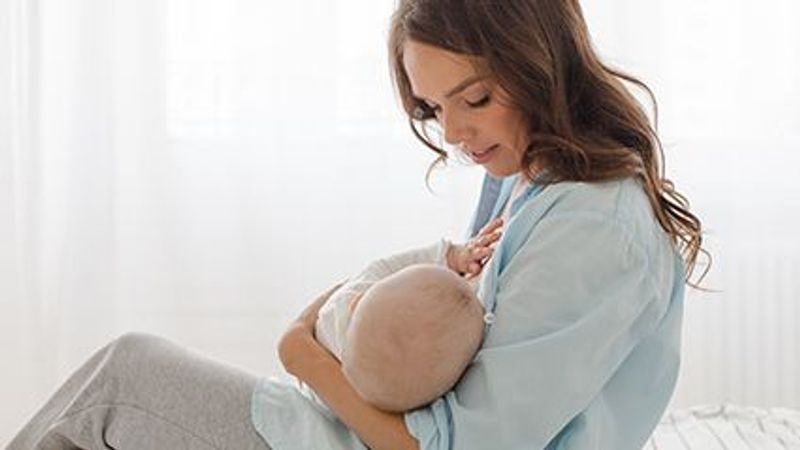 "This is a compelling first step in defining a potential relationship between maternal diet and allergy risk," said Dr. Peter Lio, a clinical assistant professor of dermatology and pediatrics at Northwestern University Feinberg School of Medicine, in Chicago.

Lio, who was not involved in the study, called the work "well-done, thorough and provocative."

For the study, researchers asked more than 500 Swedish mothers about their eating habits in their 34th week of pregnancy, one month after giving birth and again four months later. They verified the mothers' reported intake of milk and milk products through biomarkers in blood and breast milk, and confirmed the children's allergies with a doctor. Kids in the study were mainly allergic to eggs, milk or both.

"We have found that mothers of healthy 1-year-olds consumed more cow's milk during breastfeeding than mothers of allergic 1-year-olds," said study co-author Mia Stråvik, a doctoral student in the division of food science at Chalmers University of Technology in Gothenburg, Sweden.

"Though the association is clear, we do not claim that drinking cow's milk would be a general cure for food allergies," she said in a university news release.

The findings held after the researchers took into account other factors known to increase allergy risk in children, such as genetics. The study wasn't designed to say how drinking cow's milk while breastfeeding lowers food allergy risk in kids, but researchers have their theories. It could be that milk in the mother's diet contains substances that stimulate the child's immune system to mature.

Another possibility is that a higher intake of saturated fat in milk may naturally lead to consumption of less polyunsaturated fats. According to co-author Malin Barman, "This would help, because we believe high levels of polyunsaturated fat in a mother's diet can counteract the maturation of a child's immune system at an early age." Barman is assistant supervisor to Stråvik.

Mothers in the study who consumed more fruits and berries while breastfeeding had a greater chance of having children with eczema by age 1, the study showed. Eczema, also called atopic dermatitis, is a chronic skin condition characterized by itching and inflammation. These findings were not validated with biomarkers and still need to be confirmed.

The researchers are following-up to see how the children are faring at age 4.

Lio cautioned new moms not to think that simply adding more milk to your diet will decrease your child's risk of developing allergies. "This type of work needs to be replicated, ideally in larger numbers and with different populations to cement these findings," he said.

"It seems very likely that factors such as maternal diet can and should have an impact on the development of allergies (and a host of other characteristics) in the baby. And for such terrible diseases like food allergy and atopic dermatitis, we need all the help we can get to better understand, control and, ideally, prevent them," Lio said.

Dr. Bruce Lanser, a pediatric allergist at National Jewish Health in Denver, cautioned against putting too much weight on the study's findings. "Data regarding maternal diets during pregnancy and breastfeeding have long been mixed and conflicting because there are so many potential factors that can be protective and harmful," he said.

"There is no evidence to support any restrictions in the maternal diet during pregnancy and/or breastfeeding, [and] avoidance of any particular food or food group is strongly discouraged," Lanser said. He played no role in the study.

The best advice for new mothers is to eat a well-balanced diet that includes healthy fats, fruits and vegetables, calcium and vitamin D, he said. "Moms should discuss it with their doctor and/or a registered dietitian before undertaking any restricted diet or one with over-representation of any particular food source," Lanser said.

The study was recently published online in Nutrients.

Kids With Food Allergies, a division of the Asthma and Allergy Foundation of America, provides up-to-date information on living with food allergies.