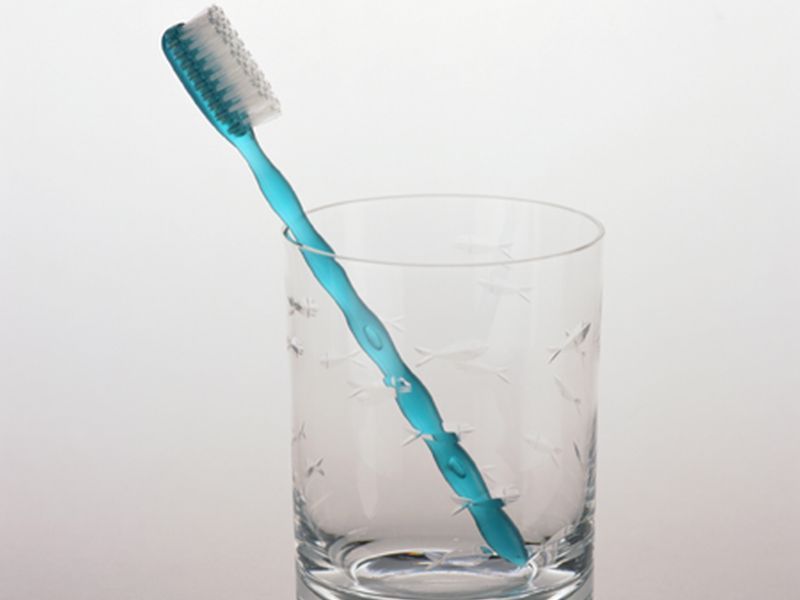 The Germs on Your Toothbrush Can Reveal Your Health

The microbes on your toothbrush mostly come from your mouth -- not your toilet -- and provide insight into your oral health, researchers say.

Their study was inspired by people's concerns that flushing a toilet might create a cloud of aerosol particles that end up on toothbrushes and other bathroom surfaces.

The researchers asked people to mail in their used toothbrushes so they could examine DNA on the bristles to identify the microbial communities. The investigators found that those communities matched microbes commonly found inside the mouth and on skin.

That was the case no matter where in a bathroom the toothbrushes had been stored, including inside a closed cabinet or out in the open, according to the study the researchers dubbed "Operation Pottymouth."

The report was published online Jan. 31 in the journal Microbiome.

"I'm not saying that you can't get toilet aerosols on your toothbrush when you flush the toilet," said senior author Erica Hartmann, assistant professor of environmental engineering at Northwestern University in Evanston, Ill.

"But, based on what we saw in our study, the overwhelming majority of microbes on your toothbrush probably came from your mouth," she said in a university news release.

Hartmann and her team also found that toothbrushes from people who regularly flossed and used mouthwash harbored fewer kinds of microbes.

"If you practice good oral hygiene, then your toothbrush also will be relatively clean," Hartmann said. "But it's a small difference. It's not like people who regularly floss, brush and use mouthwash have no microbes and those who don't have tons. There's just a bit less diversity on toothbrushes from people who do all those things."

Microbes from toothbrushes of people with better oral hygiene had slightly more antimicrobial-resistance genes. But Hartmann said these genes likely came from air or dust in the bathroom.

Bottom line: There's no need to be alarmed by microbes living on your toothbrush and, unless your dentist recommends otherwise, you shouldn't use antimicrobial toothpastes and toothbrushes.

"By using antimicrobials, you aren't just getting rid of microbes. You are pushing the surviving microbes toward antimicrobial resistance," Hartmann said. When that occurs, microbes no longer respond to medicines and infections become harder to treat.

"In general, for most people, regular toothpaste is sufficient," Hartmann said.

The U.S. Centers for Disease Control and Prevention has more on oral health.