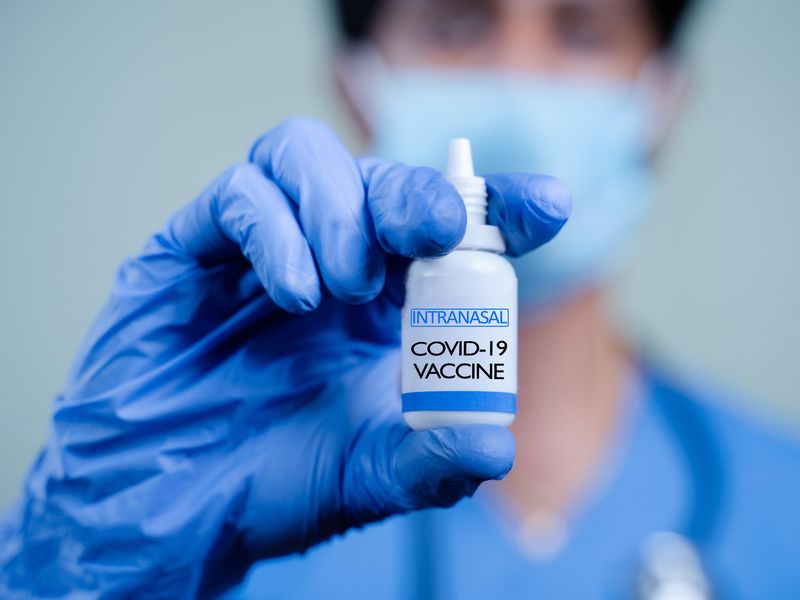 Is the War Against COVID Variants Won in the Nose?

The best booster for COVID vaccinations might not be yet another shot, but a nasal spray, an early study hints.

Since early on in the pandemic, some researchers have speculated that the most effective way to fight COVID is through vaccines that not only spur an immune response in the blood, but also in the mucus membranes of the nose and the rest of the respiratory tract.

That type of immune response, called mucosal immunity, meets viruses at their entry point into the body. In theory, a nasal-spray vaccine could help the body mount a stronger initial defense against SARS-CoV-2 -- keeping it from breaching the gates, explained Jie Sun, the lead researcher on the new study.

Such a vaccine, given as a booster after mRNA vaccination, could potentially prevent "breakthrough" infections and transmission of the virus, said Sun, a professor at the University of Virginia School of Medicine.

"Our current mRNA vaccines are superb in protecting against severe COVID, including hospitalization and death," Sun said.

That is, the immune response sparked in the blood -- including multiple cell types that battle the virus -- still works very well at containing the infection.

But as SARS-CoV-2 has mutated and new variants have become dominant, the existing mRNA vaccines have become less effective at preventing milder illness and transmission.

In the new study, published recently in the journal Science Immunology, Sun and his colleagues demonstrated the vaccines' shortcomings when it comes to mucosal immunity.

The not-so-good news: Their lung fluid showed only low levels of neutralizing antibodies against both the Delta and Omicron variants that Sun's team tested. In contrast, lung fluid from patients who'd been hospitalized with severe COVID did have antibodies, B cells and T cells specific to SARS-CoV-2 -- though the response to the Omicron variant was weakened.

According to Sun, it all points to one thing: Standard vaccines do not draw a strong response in the mucosal immune system.

That's something that many researchers have speculated, Sun said, and there are already nasal vaccines under development to fight COVID.

In a second arm of their study, Sun's team found early hints that nasal vaccines could serve as a good booster to mRNA vaccination -- though that is based on lab mice.

The researchers showed that mice given a nasal booster after mRNA vaccination had a "strong" neutralizing antibody response against all SARS-CoV-2 variants tested, in both the blood and lung fluids.

However, an infectious disease expert who was not involved in the study cautioned that findings in mice often do not translate to humans.

"In my mind, we need a lot more data," said Dr. Paul Goepfert, director of the Alabama Vaccine Research Clinic at the University of Alabama at Birmingham.

The value of nasal-spray boosters for people has yet to be shown, he pointed out.

"The vaccines we have are incredibly good at preventing severe disease," Goepfert said. And that, he explained, suggests that the immune cells patrolling the blood do rapidly get to the lungs when a vaccinated person is infected.

It's possible that a nasal vaccine could help prevent breakthrough infections and transmission -- but there the "big problem" is the new SARS-CoV-2 variants that keep emerging, Goepfert noted.

"We can't jump to conclusions that a [nasal vaccine] would be effective against new variants," he said.

The vaccine used in these mouse experiments contained an adenovirus that served as a vehicle to deliver the SARS-CoV-2 "spike" protein. Adenoviruses are common cold viruses, and the one used in this vaccine had been rendered replication-deficient -- meaning it cannot reproduce itself and spread in vaccine recipients' bodies.

One nasal vaccine using the same adenovirus had been under development by the biotech firm Altimmune. The company dropped the project last year, after an early trial showed that the nasal spray did not elicit the expected immune response.

Still, there are at least a dozen nasal vaccines under study, using various approaches to spurring a mucosal immune response to SARS-CoV-2, according to an editorial published with the study.

In it, Drs. Eric Topol and Akiko Iwasaki call for a national investment in nasal vaccine research, similar to the Operation Warp Speed that fueled mRNA vaccine development.

"We urgently need such an accelerated initiative now for nasal vaccines," they wrote.

The World Health Organization has more on COVID vaccines.