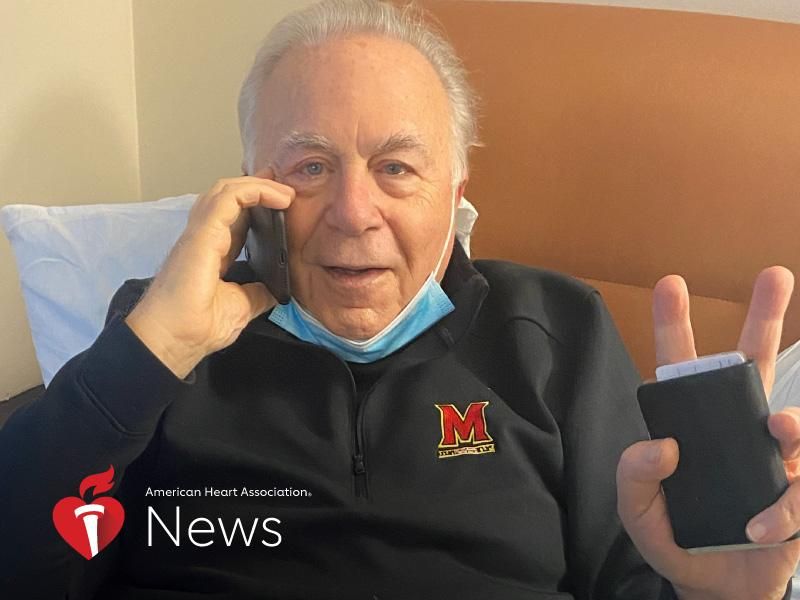 For more than 50 years, Stan Goldstein has donned his red, black, white and gold -- the colors of the University of Maryland's Terrapins -- to cheer for his alma mater's men's basketball team at home games.

In the 1990s, the team invited him to travel on their charter plane with other donors, so he became a fixture at road games, too.

In January, Stan, 75, left his home in Potomac, Maryland, for a game in Iowa City, Iowa. He had dinner that night with Terrapins staff. The next day, he took staff out for brunch at a 1950s-era restaurant known for its iconic pie milkshakes. He enjoyed a decadent chocolate bourbon pecan pie shake. Then, they went to the arena.

Stan took his seat near the Terps bench to watch players warm up. The game tipped off and the Terps played well. They were unexpectedly ahead. As usual, Stan and his wife, Sara, texted about the game as she watched from home.

Suddenly, his vision became wavy. Everything turned white. He collapsed in his seat as the halftime buzzer sounded and the court emptied. Then he lost consciousness.

Across the court, several EMTs noticed a commotion by the Terps' bench and they rushed over. Stan wasn't breathing. He didn't have a pulse. He was in cardiac arrest.

The EMTs started CPR. The arena's medical director rushed over, too. They revived Stan. Once he was stabilized, the crew wheeled him on a gurney into the training room.

There, he went into cardiac arrest a second time. The EMTs used an AED, or automated external defibrillator, to restart his heart.

An ambulance rushed Stan to a nearby hospital. Bloodwork and images of his heart showed no reason for the cardiac arrests. Stan had no history of an irregular heartbeat. Doctors didn't think it was connected to heart surgery he had seven years prior.

"They said this was an electrical issue, not a plumbing issue," Stan said. "They couldn't tell me with any certainty why I went into cardiac arrest. That freaked me out."

Back in Maryland, Sara was surprised to receive a call from a Maryland staffer. He told her Stan had a cardiac arrest. She called their daughter, who lives nearby, to come over.

An hour later, her phone rang again. The call was coming from Stan's cellphone. He was awake and told her what happened. "It was a whole sense of relief," she said. She bought a plane ticket to Iowa City.

Stan had surgery to get an implantable cardioverter defibrillator, or ICD. It monitors his heart rhythm and will deliver a shock if there's ever a dangerous rhythm.

"It gives me a lot of comfort," he said.

While Stan was in the hospital, the arena doctor came to see him. On a white board, the doctor drew a diagram to show Stan how his life had been saved thanks to rapid CPR and the AED.

"I was extremely lucky with where and when it happened since it was halftime and there were no obstructions on the court at the time," Stan said. "I was in the right place at the right time. Instead of in a hospital, I could have ended up in a morgue."

Stan's three children came to see him and he also received many calls from well-wishers: the Iowa coach, Maryland's interim coach and athletic director, past coaches and the president of the University of Maryland. The Terps made a video wishing him a speedy recovery.

"To this day I get overwhelmed thinking about the response," he said. "It was just incredible and unexpected and heartwarming."

At home, Stan started a cardiac rehab program, exercising on a treadmill, elliptical and stationary bike.

Soon after, he received a card in the mail. It was from the ICU nurses at the Iowa hospital wishing him well. "They went above and beyond," he said.

Now, Stan exercises several times a week at home and walks his neighborhood to stay fit. "As a caregiver, that makes me feel better," Sara said. "I tend to be a lot more scared than he is. It could happen again any second. I think about it every single day."

Stan recovered enough to travel to several road games at the end of the last season. In August, when this season's schedule came out, he immediately mapped out his travel plans. He'll attend every single game, including one in Iowa City on Jan. 15.

He hopes to visit with Iowa's coach and take the arena doctor and EMTs that saved his life out to dinner to thank them. He's already shown his appreciation by making a donation to the University of Iowa for the purchase of new AEDs "so that others have the same wonderful outcome that I did."

"The people of Iowa were really extraordinary," Stan said, "and this year, it should be a fun and exciting season."