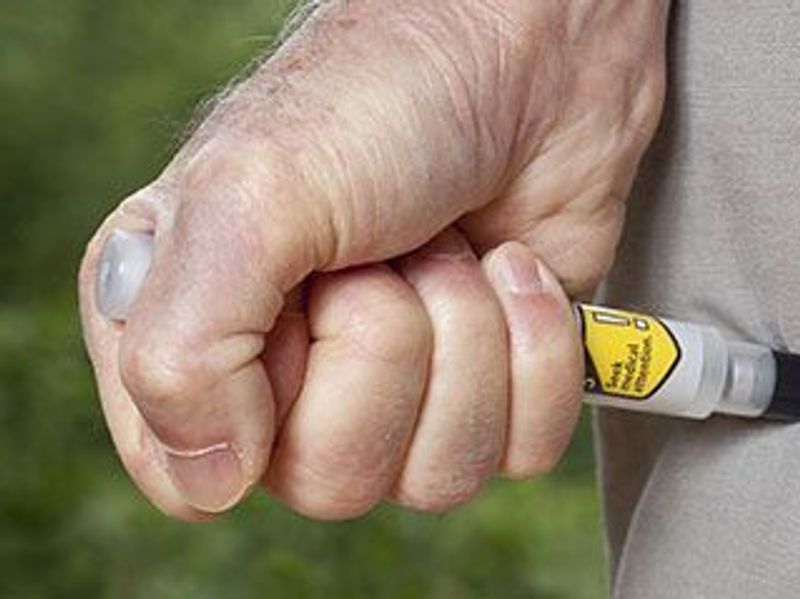 The EpiPen is a known lifesaver when someone with a serious food allergy eats something they can't tolerate.

Yet the auto-injection treatment is greatly underused in the United States, according to a new survey.

Just over half of at-risk adults said they had ever been prescribed the device, researchers found. And more than one-third of severe allergy sufferers mistakenly believe the EpiPen itself is a serious threat to their health.

Food allergy affects more than 32 million Americans. EpiPens contain epinephrine, the only medication able to stop life-threatening anaphylaxis, which can occur from a severe allergic reaction.

Roughly 1,000 patients were surveyed online. Those without EpiPens on hand gave a wide range of reasons, among them insurance issues. Without health coverage, Malawer said the injectors cost hundreds of dollars for a two-pen set, which is standard protocol. Brand name EpiPens, marketed by Mylan pharmaceuticals, retail for about $700, while generic versions are about $350, according to healthshare101.com.

Survey respondents also cited a lack of access to doctors and/or pharmacies; out-of-stock pharmacies; and fear of needles.

“The biggest surprise was that a staggering 25.6% of our respondents replied that the reason they did not have an (EpiPen) was because their doctor did not indicate it was needed,” Malawer added. “This needs to change.”

Only 52% had been prescribed an allergy pen, and 36% endorsed the belief that EpiPens can cause life-threatening side effects, the investigators found.

The researchers “did not explore the genesis of this mistaken belief,” said co-author Jennaveve Yost, an education and health research manager with Food Allergy Research & Education in Burke, Va. But she pointed out that the anti-vaccine movement "is not likely helping the narrative that epinephrine is a safe and effective medication.”

Another possibility, she said, "is the misunderstood belief that Benadryl — a first generation antihistamine — is the appropriate first-line of action against an allergic reaction. In comparison to Benadryl — which is affordable, and has been on pharmacy shelves and in medicine cabinets for decades — injectable epinephrine appears to be an extreme treatment.”

Yost also said the high cost of epinephrine and the inconvenience of having to carry it around give people "just enough excuse to question whether it is needed in the first place.”

The findings were presented last week at the annual meeting of the American College of Allergy, Asthma & Immunology, in Louisville, Ky. Research presented at meetings is usually considered preliminary until published in a peer-reviewed medical journal.

What can be done?

It's incumbent on doctors and nurses “to carve out time to go over how and when to use epinephrine auto-injectors, and to discuss which style and brand is best for that particular patient's lifestyle," she added. They need to stress its safety and effectiveness when used at the first signs of a severe allergic reaction, she added.

Dr. John Costa is medical director of the allergy and clinical immunology division at Brigham and Women's Hospital in Boston. He said the survey results are surprising given that, in general, allergists already “spend an enormous amount of time in patient education" related to EpiPen usage.

Costa, who wasn't involved in the study, said allergists are insistent about EpiPen use because of the potentially fatal consequence of not having one on hand.

“If you ate a food for which you are allergic and your throat is closing shut and you are gasping for air, the potential for you to die in the next 5 minutes should outweigh any concerns about [EpiPen] adverse side effects,” Costa explained.

His bottom-line: all patients should have an EpiPen on hand at all times.

Costa tells patients the EpiPen is their "nuclear weapon to treat a systemic food allergic reaction and save their life. It is their best friend, and should be used whenever in doubt, as there is minimal likelihood for any serious adverse reaction.”

There's more on epinephrine auto-injectors at the American College of Allergy, Asthma & Immunology.