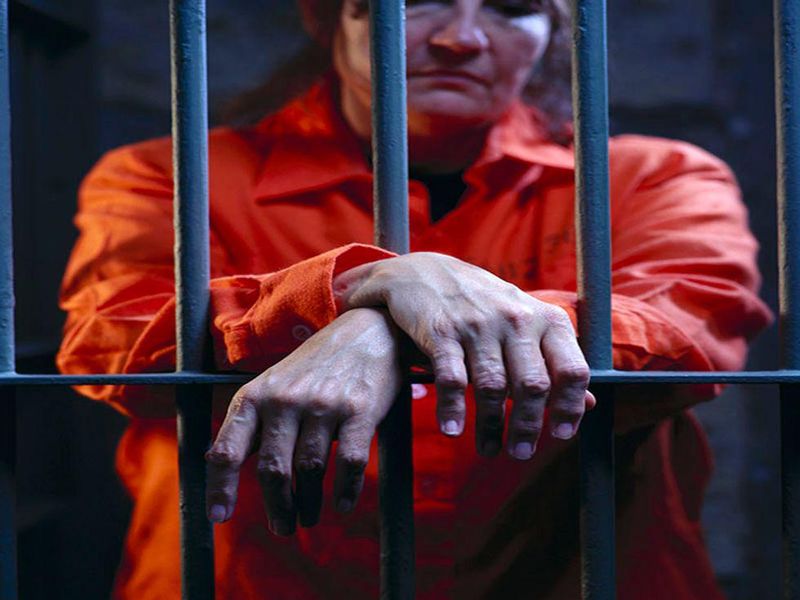 Here's another reason to stay out of jail: New research shows the risk of dying from cancer is sharply higher among those who are behind bars or have been recently released.

In Connecticut prisons, where the data for this study were gathered, the average age for a cancer diagnosis was 50. For those who were never behind bars, it was 66. Other benchmarks showed similar differences.

Cancer is the leading cause of death in prison.

"The question is: Is incarceration itself a cause of these poor health outcomes or is incarceration something that tracks with other risk factors for adverse health outcomes, such as poverty or living in communities with higher environmental risks?" said study co-author Dr. Cary Gross. He is founding director of the Cancer Outcomes, Public Policy and Effectiveness Research Center (COPPER) at Yale School of Medicine.

Gross said he has long been interested in cancer equity, having previously examined how race and other factors affect access and quality of care for cancer patients. A co-author of the study, Dr. Emily Wang, a professor of medicine and public health at Yale, has investigated the health impacts of incarceration for years.

They joined other researchers to study how those themes overlapped, collaborating with Connecticut's state cancer registry and its Department of Corrections to gather information.

In all, the study included more than 216,000 adults diagnosed with invasive cancer in Connecticut between 2005 and 2016, including 239 diagnosed while in prison and 479 whose cancers were found within a year of release.

Five-year survival for someone diagnosed with cancer within a year of release was 54.6%. Those still incarcerated had a survival rate of 63.2% compared to 67.2% for those who were never in prison.

Past research has found that within a year of leaving prison, the risk of death rises 12-fold, Gross said. Overdose is a common cause, but heart disease and cancer are other contributors.

In this study, cancers had spread in about two-thirds of patients diagnosed while incarcerated and more than half of those diagnosed within a year of leaving prison. That was true even for cancers for which screening tests are available, said lead author Dr. Oluwadamilola Oladeru, an assistant professor of radiation oncology at the University of Florida in Gainesville.

Colon cancer was the most common among the groups studied. It comprised about a third of cancers in the recently released group.

Other commonly found cancers in those who were incarcerated were lung, prostate, leukemia, lymphoma and liver.

"There's an opportunity there for improving where we screen and how we screen and making sure that there's adherence to the screening guidelines," Oladeru said, adding that researchers wanted to make sure that late-stage diagnosis was not accounting for the stark differences in death rates that they observed.

Adjusting to life after prison

When researchers adjusted for stage of cancer, they found that it accounted for some but not all of the relationship between incarceration status and death.

Other factors probably contribute with this group of former prisoners, Oladeru said.

"It could be systemic barriers, including food insecurity, housing, employment, medical insurance, getting primary care access," she said. "Trying to adjust back to society within 12 months, the last thing you're probably thinking about is colon cancer screening."

A number of factors could contribute to later diagnosis, including screening, timely assessment of symptoms or risk factors that people may be unaware of.

People diagnosed with invasive cancer were more likely to be male and Black or Hispanic.

Researchers have undertaken a careful review of medical records to compare the quality of cancer treatment received by the three groups in the study.

Other potential causes for the higher rates among people who have done or are doing time include what's called "allostatic load," the cumulative burden of chronic stress and life events. Another question is whether risk factors in prisons may owe to buildings that were built at a time when conditions existed in the environment or soil that would not be acceptable today.

Other research has shown that physiologic age -- the one that shows a person's true biological stage of life -- is much older than chronologic age for those who are incarcerated.

"So even if you have a 30-year-old individual in prison, physiologically, they're aging much faster, given the conditions, being confined to a particular space," Oladeru said.

He noted that incarcerated individuals may have been exposed to carcinogens in earlier work environments. They may also have lifestyle-related risk factors from prior to imprisonment, such as alcohol use or obesity.

Some types of cancers for which those are risk factors have limited screening options and subtle early symptoms. A lack of screening equipment and medical infrastructure in prisons and safety protocols for taking an inmate offsite may present barriers, Kamal said.

"Naturally, what we'd be concerned about is that in a situation where those symptoms aren't taken sort seriously, that you can miss an opportunity to catch a cancer early," he said.

When inmates are preparing to leave prison, providing information about screening recommendations and information about resources to help pay for it would be important, he added. Many people don't realize that the Affordable Care Act or Medicaid cover many cancer screenings.

"I think for any incarcerated population, we're worried in particular about having access to care in an either preventative way, so having cancer screenings and so on, but also in an early diagnostic kind of way," Kamal said.

Co-author Wang has helped establish transition clinics for inmates who are leaving custody.

Gross said other steps could include considering how to better plug people into the health care system and improving the quality of care in prison settings.

"We have to still recognize that even though there's been very small, incremental movements toward decarceration in our country, we still lead the world in incarceration," Gross said. "So, another way -- if we want to decrease the health impact of incarceration -- is maybe to stop incarcerating so many people."

The findings were recently published in the journal PLOS ONE.

The U.S. Centers for Disease Control and Prevention has more on equity in cancer prevention and control.