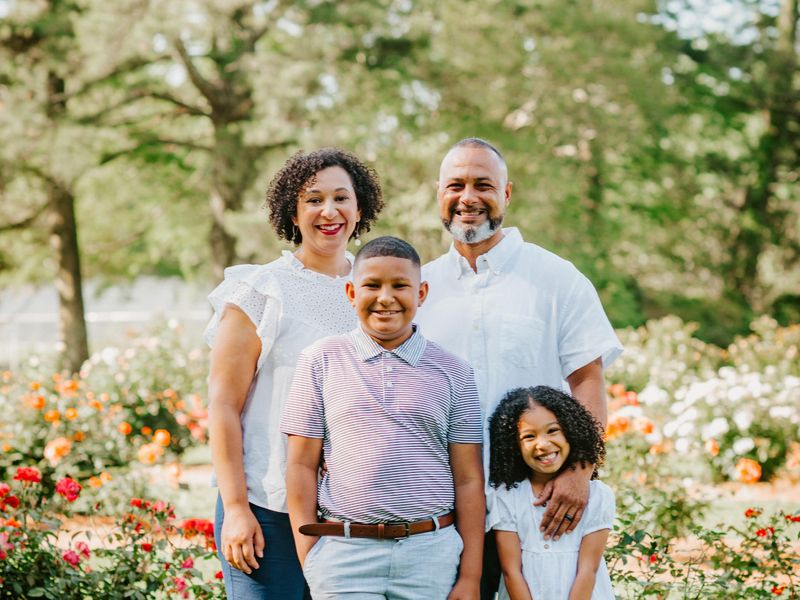 Then in 2012 he found himself back in an emergency room, again suffering from chest pain.

"That's when I found out three of the four bypasses basically had failed again," recalls Gradney, now 44 and living in Baton Rouge, La.

People with FH essentially are born with high cholesterol levels that only increase as they grow older. About 1 in every 250 people inherits the condition, according to the U.S. Centers for Disease Control and Prevention.

But Gradney also is Black, and FH tends to be dramatically underdiagnosed and untreated in Black Americans compared to white people, experts say.

Black people are diagnosed with FH at an older age than any other racial or ethnic group in America, according to the nonprofit Family Heart Foundation.

Research also has shown that Black Americans with FH are less likely to have been prescribed cholesterol-lowering medications, even though normal lifestyle modifications aren't enough to prevent heart disease in someone with the genetic disorder.

"It's most important to recognize that people with FH are at risk not just because they have an unhealthy lifestyle or diet," said Dr. Keith Ferdinand, chair of preventive cardiology at Tulane University School of Medicine in New Orleans. "Many of these patients will need not only statins but three to five medications to lower cholesterol."

No one checked for FH

Gradney says no one bothered to check him for FH after his first heart emergency, even though nothing he did afterward seemed to lower his abnormally high cholesterol.

"The doctor wouldn't blame it on me directly, but it was always something I wasn't doing," Gradney said. "My wife was a registered dietitian, so I felt like I had the eating-healthy aspect down pat. I was taking my medications. I was being active and exercising. But it was never enough."

People with FH have 20 times the risk of developing heart disease if they are not treated, the American Heart Association says.

Men with FH develop heart disease 10 to 20 years earlier than expected, and women 20 to 30 years sooner, according to the AHA. Half of men with untreated FH will have a heart attack or angina before they turn 50.

Gradney lost his father to a sudden heart attack one morning in 2004. Five months later, he suffered chest pains that made him fear he was having a heart attack himself.

"I woke up one morning and I just felt like my heart was going to explode, you know?" said Gradney, who underwent open heart surgery in 2005.

Eight years later, after learning he was in serious danger again, Gradney decided to take matters into his own hands.

Through an uncle, Gradney contacted a cardiologist at Johns Hopkins who agreed to see him. After three days of testing, the doctor diagnosed him with FH.

"Once that was diagnosed, just like that all the dominoes fell into place," Gradney said. "Everybody knew what to do, how to treat it. I was put on aggressive prescription medications. Six months later, my levels basically were normal, probably for the first time in my life."

Research has shown that Gradney's struggle is not unusual.

Black people are slightly more likely than whites to have FH, with a prevalence of 0.47% compared to 0.4%, according to a 2016 study in the medical journal Circulation.

But only 61% of Black people with FH treated at special cholesterol clinics in the United States are prescribed cholesterol-lowering drugs, compared with 73% of whites, according to a 2021 study published in the Journal of the American Heart Association.

Black patients also tend to have other problems left untreated that add to their heart risk, compared to white people, the study found. These include high blood pressure (82% versus 50%), diabetes (39% vs. 15%) and smoking (16% vs. 8%).

Structural racism and racial discrimination are the most likely causes of these disparities, Kulkarni said.

Black Americans have more limited access to cholesterol screenings and medications, Kulkarni and Ferdinand said. They also are less aware of the risk posed by FH.

"Furthermore, and understandably so, [structural racism] has eroded trust towards the health care system among Black individuals and communities," Kulkarni said. "Taken together, this has led to disparities that impact not only the treatment of hypercholesterolemia, but moreover, the delivery and adoption of high-quality medical care."

The experts recommend that Black people take proactive steps to protect their heart health, just as Gradney ultimately did.

"Every adult should have his or her cholesterol checked. Know your cholesterol," Ferdinand said. "And if you have a family history of people having heart attacks, strokes, especially early on in their 50s and early 60s, then it's not enough to just say that heart disease runs in your family. You should receive a specific diagnosis."

This worked for Gradney. He hasn't visited an ER or spent another night in a hospital since receiving his diagnosis in 2012.

"My numbers are amazing. My last blood work, my total cholesterol was under 71, so that was astounding," Gradney said.

"Be mindful. Check into it. Take advantage of the resources that are available out there," Gradney said. "Don't just accept that high cholesterol runs in the family. Advocate for yourself."

The Family Heart Foundation has more about Black Americans and heart risk.