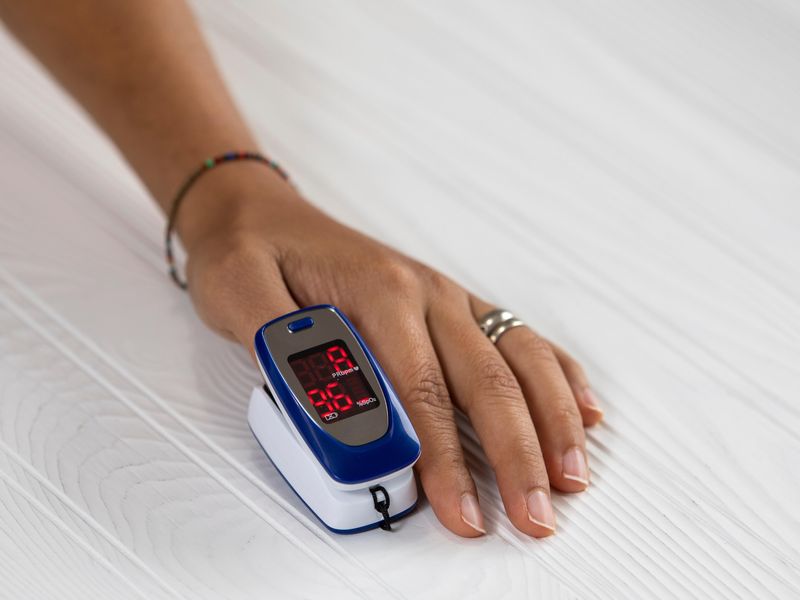 Early in the pandemic, scores of Americans bought pulse oximeters to help determine how sick they were while infected with COVID-19, but new research finds the devices often miss dangerously low blood oxygen levels in Black veterans.

This is not the first time such inaccuracies have been spotted in Black patients: The problem is serious enough to have prompted the U.S. Food and Drug Administration to announce it will hold a public meeting of its Medical Devices Advisory Committee to discuss the accumulating evidence and make recommendations for the use of pulse oximeters. No date has been set for the meeting yet.

The latest research, which culled data from over 100 VA hospitals throughout the United States, follows up on the team's original study in 2020.

The study authors likened the inaccuracies to grades in school: if you're scoring high A's, a couple of points don't matter much - a 96 and a 100 are still an A grade. But there's a big difference between an 88 and a 92, a B+ and an A-, respectively. With blood oxygen levels, any reading below 92 is considered dangerous.

"This is about your brain not getting enough oxygen," said senior study author Dr. Theodore Iwashyna, a professor of internal medicine at the University of Michigan.

Still, some experts argue that the data might be biased because of the nature of its control group.

"In some ways, I would say the blood gas [reading] is not an appropriate control," said Dr. Arjun Venkatesh, chief of the section of administration of emergency medicine at Yale University School of Medicine, in New Haven, Conn. Venkatesh noted that the ideal setting for this test would be in a clinic or hospital using people with normal breathing rather than those in critical care.

"Otherwise, we're looking at a very select group of people who happened to get an arterial blood gas when there's some sudden rapid change happening or when you're already on a ventilator," he explained.

"We did a study early in the COVID pandemic on those thermometers that are used on peoples' heads," Venkatesh explained. "We did the same thing, we took a lot of electronic health records data, but we found that the data lined up terribly."

But the University of Michigan researchers said they've faced similar criticism with each study they have published, which is why their latest effort turned to the VA health system, honing in on more than 30,000 veterans who received both a pulse oximeter reading and an arterial blood gas test within 10 minutes of each other.

Their new findings were published online July 6 in the BMJ.

In another study, published online July 11 in JAMA Internal Medicine, investigators at Brigham and Women's Hospital and Beth Israel Deaconess Medical Center in Boston found pulse oximeter inaccuracies may also be associated with disparities in care. The researchers found that Black, Hispanic and Asian patients treated in the ICU not only had greater discrepancies between pulse oximeter readings and blood gas tests, but they also received less supplemental oxygen than white patients.

"It's important to keep in mind that pulse oximeters give us an estimate, but it's more than just a number. We use that estimate to make clinical decisions, such as how much supplemental oxygen to give a patient," corresponding author Dr. Eric Gottlieb, who completed the research while a fellow in the renal division at Brigham, said in a hospital news release. "It has real meaning for the patients that we care for because we can track back racial disparities in treatment to these differences in measurements."

The problem with pulse oximeters is certainly not new to federal health officials.

In February 2021, the FDA issued a warning that advised against making clinical decisions based on one pulse oximeter reading alone.

"As someone who does a lot of consultation with patients on the floor, I'm terrified by the number of times I've been reassured by a number on a pulse-ox or blood gas and possibly missed the real cause of the problem altogether," Iwashyna said. "We use this as a vital sign."

But, "573,000 times in the seven years of our data there were cases where we recorded a pulse oximeter reading on a Black veteran that missed occult hypoxemia which we wouldn't have missed if the device worked as well on the Black vet as it does on a white vet," Iwashyna said. "That number haunts me."

But Venkatesh warned against drawing any conclusions that involved changing health care practice.

"The only solution here is to figure out if there's an engineering solution on the device," Venkatesh said. "We shouldn't be changing practice on this, we should be changing the device."