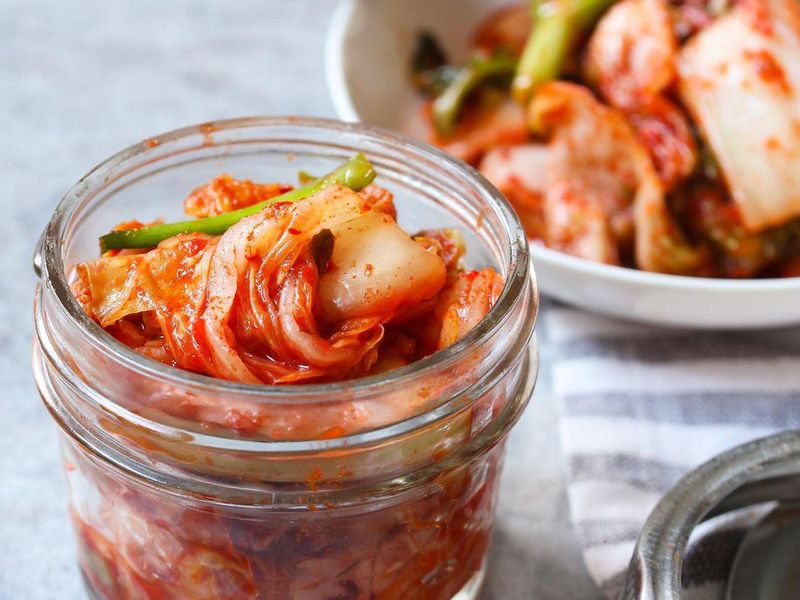 Fermented Foods Could Boost Your Microbiome

Fermented foods may seem like just another health fad, but a small trial suggests they can help strike a healthier balance in the body's gut bacteria.

In a study of 36 people, researchers found that those randomly assigned to eat plenty of fermented foods, such as yogurt, kimchi and kombucha, showed an increase in their gut "microbiome" diversity.

The microbiome refers to the vast collection of bacteria and other micro-organisms that naturally dwell in the gut. Research in recent years has been revealing just how important those microbes are to the body's normal processes -- from metabolism and nutrient synthesis to immune defenses to brain function.

There is still much to learn about what constitutes a "healthy" microbiome, said senior researcher Justin Sonnenburg.

"But broadly speaking, greater diversity is believed to be healthier," said Sonnenburg, an associate professor at Stanford University, in California.

That's based, in part, on research showing that people with obesity or diseases like diabetes and colitis tend to have less-diverse microbiomes than healthy people.

In addition, Sonnenburg said, scientists have found much greater microbiome diversity among certain indigenous populations who still live pre-industrial lifestyles -- and typically do not suffer modern ills like obesity and clogged heart arteries.

The makeup of any one person's microbiome is influenced by many things, including genes, health conditions, stress and medication use (particularly antibiotics). But diet is considered a key player.

And the typical Western diet -- heavy in processed foods and low in "whole" plant foods -- has "many deficiencies" that could make for a less-diverse microbiome, Sonnenburg said.

So he and his colleagues are studying various ways to change that.

For this latest trial, they randomly assigned 36 people to ramp up their intake of either fermented foods or fiber-rich foods for 10 weeks.

The former group ate plenty of yogurt, fermented cottage cheese, drinks like kombucha and kefir, and fermented vegetables like kimchi and sauerkraut. Those in the high-fiber group, meanwhile, focused on beans, fruits and vegetables, whole grains and nuts.

In the end, the fermented-foods group showed an increase in their gut microbiome diversity, based on their stool samples. In contrast, there was no such change in the high-fiber group, the researchers reported July 12 in the journal Cell.

Fermented foods appeared to have an additional benefit, too: a reduction in blood markers of body-wide inflammation. Such chronic, low-level inflammation is believed to contribute to many different diseases.

It's not clear whether the altered microbiome was responsible for dialing down inflammation, however, Sonnenburg said.

"Those things could have happened in parallel," he noted.

It's striking that the microbiome shift happened over just 10 weeks, according to Colleen Tewksbury, a researcher at the University of Pennsylvania's Perelman School of Medicine, in Philadelphia.

"It's such a short time frame. To see this kind of change is pretty astounding," said Tewksbury, who is also a spokesperson for the Academy of Nutrition and Dietetics.

During fermentation, foods are exposed to bacteria or yeast that convert sugar into alcohol or acids -- providing that distinctive tangy taste.

So it's logical to assume the microbes in those foods are simply "entrenching" in the gut's microbiome, Sonnenburg said.

But that's not what the researchers found. Instead, it seemed the fermented foods may have spurred a change in the gut's "resident community" of microbes, the study authors said.

Again, the Western diet could be the culprit. Past research suggests it can deplete the gut of its "fiber-degrading" microbes, Sonnenburg said.

And in this study, participants' stool samples indicated that a lot of their dietary fiber was not being processed by their gut bacteria.

It's possible that with more time, Sonnenburg said, the microbiome will adapt to increased fiber intake.

No one is suggesting fermented foods are a magic bullet that can simply be added to your burgers and fries. And Tewksbury cautioned that this trial did not look at health outcomes, or test the diet changes for managing any medical condition.

Both she and Sonnenburg emphasized the importance of diets that are high in nutrient-rich plant foods and low in processed foods. Fermented foods can be part of that.

Do check the labels, though, Tewksbury noted. Added sugars can be lurking in some products.