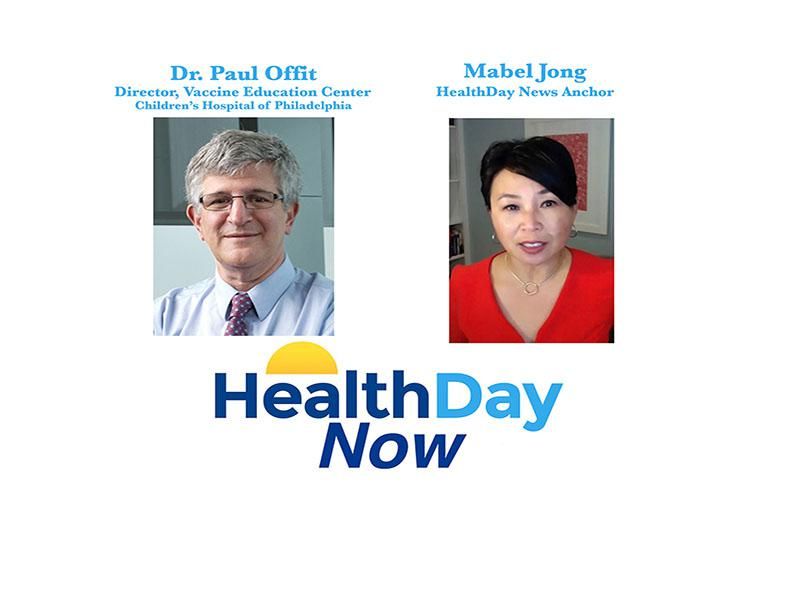 Don't believe everything you hear: A sizable minority of Americans are still hesitant about getting the new COVID-19 vaccine, but their fears are mostly not warranted, a leading vaccine expert says.

During the interview, Offit refuted many of the rumors that lead some to avoid the vaccine, while noting others that actually have some basis in fact.

Worries about the vaccines are understandable "because it was the fastest vaccine ever developed, and it was developed using a novel technology that we hadn't used before," Offit said.

"But you know, the proof is in the pudding, and the pudding is at hand," he continued. "There was reason to be skeptical initially, but that skepticism should melt away in the face of all these compelling data."

Safety data have shown that deaths occurring after vaccination have in every case been coincidental, Offit noted.

"There's no reason to suspect it would cause harm," Offit said of the vaccine.

The one side effect that has been documented, anaphylactic shock, also occurs with other vaccines and is easily treated with an epinephrine shot, Offit added. It's about one in a million for other vaccines, while for the Pfizer vaccine it's five cases per million and for the Moderna vaccine it's 2.8 per million.

People also shouldn't worry that the vaccines aren't effective against new COVID-19 variants, because data have shown them standing up well to even the South African and Brazilian variants, Offit said.

Interestingly, Offit noted that the coronavirus that swept through Europe and the United States is actually a variant itself of the original virus that spread through China at the beginning of the pandemic.

The Pfizer and Moderna vaccines employ messenger RNA (mRNA), which has caused concerns that they might make some fundamental change to a person's DNA.

But Offit explained that the mRNA in the vaccine breaks down in the body within a few days, after prompting cells to pump out copies of the spike protein used by the coronavirus to latch on and invade cells.

In general, mRNA serves as the blueprint for thousands of substances created by your cells to sustain your body.

"Messenger RNA is something we all have in our bodies. We have it in all of our cells," Offit said. "In our cells, we have 200,000 copies of messenger RNA all the time that's making proteins and enzymes to keep us alive."

The spike protein copies created by the vaccine prompt an immune response, essentially teaching your body how to fight off a future infection from the real coronavirus.

"If you are a woman who's pregnant, you are much more likely to suffer severe disease if you're infected with the virus than if you're a woman of the same age who's not pregnant," Offit said.

Pregnant, breastfeeding women in no danger

"More than 30,000 pregnant women have already received this vaccine safely. More than half of them are being followed really on a weekly basis by the CDC, not only through their pregnancy but for the first six months after their child is born, to make sure there's not a problem," Offit continued. "We're looking, but there's no reason to suspect there would be a problem."

In fact, new preliminary research posted on Wednesday detailed the first case of a new mom passing on COVID-19 antibodies to her newborn baby girl, thanks to a shot of the Moderna vaccine she received at 36 weeks of pregnancy.

Breastfeeding might also confer some immunity from mom to baby, Offit said.

"The worst-case scenario is that the breastfeeding mother, if she has gotten vaccinated, will develop antibodies that she will passively transfer to her baby," Offit said.

Young adults also should get the vaccine, rather than shrugging it off and gaining immunity by infection, Offit said, not because they're likely to die, but because of the lasting damage the virus can do.

"It is a heinous virus," Offit said. "It causes you to make an immune response to the cells that line your blood vessels, causing inflammation of the blood vessels. So you can have strokes, heart attacks, liver disease, kidney disease," he noted.

"There are a lot of healthy young athletes, for example, that now have certain heart abnormalities because they were infected with this virus," he continued. "Don't be so cavalier about this virus. It's not just a killer. It's also a crippler."

On the other hand, there's some truth to the notion that if you've been previously infected you have some natural immunity to COVID-19, Offit said.

Already had COVID? Still get the vaccine

"If you have survived this infection, in all likelihood you are protected against moderate to severe disease associated with reinfection," Offit said. "I think that's a reasonable comment."

The U.S. Centers for Disease Control and Prevention is telling everyone to get the vaccine, whether or not they were previously infected, to simplify the vaccination effort, Offit explained.

"They didn't want to add another bureaucratic level of making sure everybody had to get tested before they got the vaccine, which would have just slowed things and made it more difficult and confusing," Offit said.

However, he added that "there's no downside to getting vaccinated if you've been naturally infected. It just boosts your immunity."

It's also true that younger people are more likely to suffer side effects as a result of their second vaccine shot, because their immune systems are more robust and produce a stronger response, Offit said.

"I never thought there would be an advantage to being older, but it is true that if you're younger than 65, you're more likely to have an immunological reaction which is associated with symptoms than if you're older," Offit said.

"I got the second dose of an mRNA vaccine, and for two days I had fever, chills and fatigue, which I treated successfully by constantly whining," he added.

Some anti-abortion activists have said they won't get the vaccine because it's grown in cells from terminated pregnancies, but that's just not true of the Pfizer and Moderna vaccines, Offit said. The mRNA in those vaccines are made in the lab, not grown in cultures.

Offit did say that the Johnson & Johnson and AstraZeneca vaccines are grown in cell cultures derived from terminated pregnancies, one in 1972 and the other in 1985.

But he noted that other vaccines for chicken pox, measles and rabies also use similar cell lines, and added that the Catholic Church has weighed in with its support for all COVID-19 vaccines.

"The Catholic Church, like all religions, cares deeply about the health and well-being of children and families," Offit said. "These vaccines save lives and keep children and adults healthier and safer, so therefore they don't stand in the way of them."

Offit also downplayed concerns over AstraZeneca's vaccine, which could be approved later this year in the United States.

Up to 11 European countries have suspended use of the AstraZeneca vaccine over concerns regarding blood clots, but Offit said he is a "little disappointed" by this response.

"Blood clots are not uncommon. We have about 900,000 people every year in the United States who suffer blood clots," Offit said. "It's not shocking to believe that someone would get a vaccine and then would suffer a common disease. The question is, are you more likely to have that if you've gotten the vaccine than if you haven't."

According to British regulators, the data show that you are not more likely to develop a blood clot if you got the vaccine than if you didn't, Offit said.

"They basically elevated a theoretical and arguably disproven risk above the real risk of getting this disease, and damned that vaccine," he continued. "It is going to create a cloud over this vaccine. While it's very easy to scare people, it's very hard to un-scare them. I think that may be what's going to happen here."

The U.S. Centers for Disease Control and Prevention has more about COVID-19 vaccines.